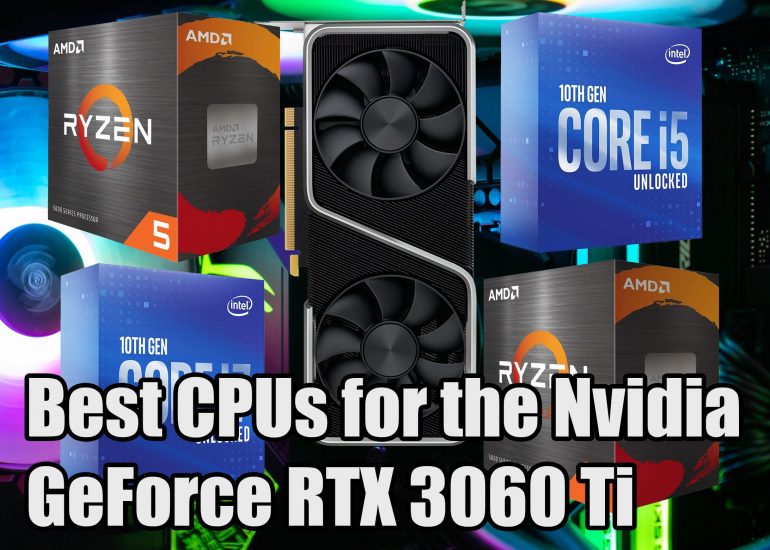 This lower-mid range graphics card offers all the new features found with the release of Nvidia’s most recently released GPUs – like DLSS 2.0, AI powered Studio and Broadcast, and Nvidia’s Reflex (which lowers overall input lag) – and does so at a much lower price than its higher-end counterparts.

With its 8 GB of GDDR6 VRAM, 1.41 GHz base clock speed, and theoretical performance of 133.2 GPixels/s, the GeForce RTX 3060 Ti has proven to be able to reach well over 144 FPS at 1080p for the majority of tested titles (TechSpot). It does struggle with 4K gaming at 60 FPS (if processing games at their maximum graphical settings), as well as 120 FPS at 1440p, but for 1080p gaming this GPU is perfect; even for the most demanding triple-A titles.

Of course, the resulting framerate is also dependent on the CPU that it will be paired with, which is why we’ve listed the four best processors to complement the GeForce RTX 3060 Ti – for both Intel, and AMD fans alike.

First off, we have Intel’s mid-range Core i5-10600K. Though this CPU does not reach the framerate levels of the other processors on this list, it is far less costly and still capable of excellent 1080p gaming at high refresh rates. It is also readily available and currently in stock.

The i5-10600K makes use of Intel’s 14 nm processing node and comes equipped with 6 cores, 12 threads, and 12 MB of Intel’s Smart Cache. It features an amazingly high base frequency of 4.10 GHz, which can be boosted to above 4.80 GHz. What’s slightly unfortunate about the i5-10600K’s design is its Thermal Design Power (TDP) of 125 W – which is way too high for its performance output. In an attempt to lower this power demand, the processing frequency can be throttled to 3.80 GHz in order to decrease the TDP to 95W – which is admittedly still quite high.

The memory that this processor can support is of DDR4 type, with two memory channels and a max memory bandwidth of 41.6 GB/s. The supported base operating speed of said memory is only 2,666 MHz, but it can be overclocked to speeds above 3 GHz.

Going a step above the Intel Core i5 CPU, we have the i7-10700K. This processor reaches framerates similar to AMD’s Ryzen 5 5600X and is readily available for purchase – at a price not so far above AMD’s option.

The i7-10700K makes use of Intel’s 14 nm lithography, with a core and thread count similar to current generation consoles: 8 cores and 16 threads. It has a base operating frequency of 3.80 GHz, which can be overclocked to an impressive 5.10 GHz. It has 16 MB of Intel’s Smart Cache, a bus speed of 8 GT/s, and a TDP of 125 W (which can be configured down to 95 W by sacrificing 300 MHz of base operating frequency). This CPU also includes Intel’s Turbo Boost Max Technology 3.0 Frequency, which identifies the best-performing cores of the CPU and provides them with thermal headroom for increased performance.

Like the i5-10600K, this CPU also has the same Intel UHD 630 Graphics processor, which is always great to have.

Next, we have AMD’s most recent CPU offerings: The Ryzen 5000 Series processors. These CPUs offer unprecedented performance; not just for gaming but for multicore dependent applications as well.

The Ryzen 5 5600X can support DDR4 RAM with speeds of up to 3,200 MHz, and its purchase includes an AMD Wraith Stealth air CPU cooler. It, of course, does not come with an integrated graphics processor, unlike Intel’s offerings.

The most troublesome aspect of the Ryzen 5 5600X is its availability, as it can be very difficult to find. It does have an MSRP of $300, which is a great price for its single and multicore performance, but can rarely be found at that price as of now.

Last but not least, we have AMD’s Ryzen 7 5800X, which fully optimizes AMD’s new Zen 3 architecture.

A single CCX that is packed to the brim with 8 cores, 16 threads, and 32 MBs of L3 Cache. It has a base clock speed of 3.8 GHz, a boost clock speed of 4.7 GHz, and a TDP of 105 Watts. It also uses AMD’s TSMC 7 nm FinFET lithography, PCIe 4.0 compatibility, and identical memory system specifications – though, unlike the Ryzen 5 5600X, it does not include a CPU cooler.

Benchmarks show us that the Ryzen 7 5800X reaches almost identical gaming benchmarks with Intel’s i9-10900K, meaning that this CPU is best suited for providing extremely high framerates at 1080p, and 1440p resolutions. At 4K, most of the load falls upon the GPU, which means the GeForce RTX 3060 Ti will most likely will still struggle to reach the standard 60 FPS.

Once again, the issue with this processor is its limited availability. It can currently be found on Amazon, but well above its $549 MSRP.