Is It Better to Build or Buy a Gaming PC? 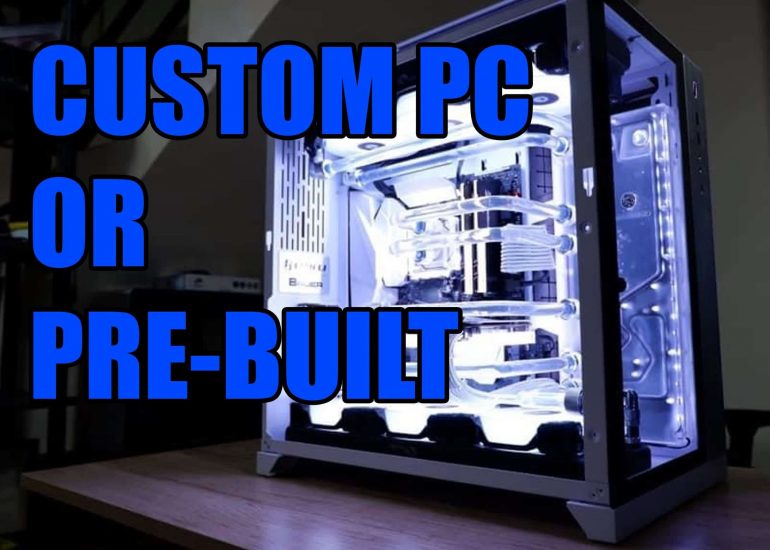 PC gaming is more well known than ever, and it’s actually quite easy to see why. We’ve got things like exclusive games, exclusive genres, and of course the ability to play on any screen with any resolution and refresh rate you want. But at the same time, there’s a serious huge hindrance for new players into this platform, and that’s the PC itself. And there’s often a question that comes up, which is whether it’s worth building your own PC or just going out and getting a Prebuilt one. In this article, I’m going to tell you right now that there is no definitive right or wrong answer. However, I wanted to help out where I could, and to show you the advantages and disadvantages of doing either.

Is it Cheaper to build or buy a Gaming PC?

One of the daunting questions from beginners in the PC world is: is it cheaper to build a PC? or should I just buy a Prebuilt one? In general, it is less expensive to assemble a gaming PC as opposed to purchasing a pre-built one. And the reason is that you are not paying an additional fee for the assembly cost and net margin associated with Prebuilt PCs. Most of the time, the more costly a Prebuilt PC is, the higher the expense of PC assembly and the net margin of the vendor will be. Therefore, it’s truly cheaper to build a PC than buying a Prebuilt one. Notwithstanding, you relinquish the time and less danger of harming the PC parts if you choose to build a PC from scratch as opposed to purchasing a pre-built one.

Advantages Of Building Your Own PC:

It’s Easy to Build a PC

Building a PC is easier than it’s ever been. We’re not talking back to the days when you had comm ports, game ports, printer ports, serial buses, and all sorts of things that we needed to be configured to even work properly. We never had a chance of even getting your computer to post or boot if you didn’t have things set properly. However, we’re lucky because those days are long gone. Although, there are so many articles that want to make it sound like computers are dead is completely false. In fact, we are at the highest popularity PCs have ever been in, and that’s because of the popularity of streaming and the amount of gaming that is out there. When it comes to installing your parts, your graphics card can only fit in one particular slot type, and your motherboard is written in plain English to tell you which slot you should use. In terms of RAM, it only goes in one place, which makes it the easiest component to install. And it is the same with the CPU, the AMD is the easiest CPUs to install but things are more rugged, ESD protection now is built into the motherboard so you can’t necessarily accidentally shock it very easily and kill your stuff.

It’s Cheaper to Build a PC

Just like what I said above, it is cheaper to build a gaming PC. By building your own PC, you are not paying extra for the assembly cost and profit margin associated with Prebuilt PCs, but you invest your own time and increases the chances of harming the PC parts either. However, as I said above, building a PC is way easier than it’s ever been, and there are so many PC building tutorials out there.

Building your own PC will allow you to be able to fully control the parts that go into your system. The fact that you can control your own parts means you can save a little here and spend a little more there. Also, Building your own PC will help you learn something new and will save you from different circumstances like when something goes wrong, you are able to fix it because you have the knowledge to do it yourself. Gaining experience in PC building is more like an accomplishment, yes, I’m referring to all the hard work that you’re gonna put in building your system. The feeling that you can sit there, look at it, and say I earned that. Most PC builders say that it’s more enjoyable to build a PC than the actual gaming with it.

You, being the system builder means you’ve got to warranty it and back it yourself all the labor. You should also be the one who will be fixing it and then hopefully being able to actually diagnose what’s gone wrong. So, sometimes people just are not comfortable with that. You don’t have online tech support that you can call for help to get your system up and running with as minimal downtime as possible.

As innovation pushes ahead, and more advanced components are made available, compatibility issues are arising. Computer components may not be compatible with what’s on the shelf today. For example, because the CPU might have come out after this motherboard and although this motherboard is gonna support it, it needs to be updated first, but you can’t update the CPU they bought right there, so you gotta do some sort of a BIOS flashback, which might be a bit complicated for beginners. Compatibility and trying to choose the right parts so you won’t waste any money is where the real challenge with PC building.

Advantages Of Buying A Prebuilt PC:

Most important of these have definitely got to be time and convenience. To put it bluntly, it takes a long time to build a PC since you’re buying all the parts separately. There is no reason to make all of your purchases in one place. Maybe you’ll find some good discounts and a couple of pieces of hardware at your local retailer, but you will still want to order other components online. It can take a while before all of the hardware is actually on your table to start building. But Prebuilt PCs are just a click or a drive away, if you can find one at your local retailer you can start gaming on it on the same day you make the purchase. They even come with Windows preinstalled most of the time, so really all you need to do is plug in the peripherals and you’re good to go, which will help you to get rid of all the bloatware that will probably be waiting for you. So, if you just want a good gaming PC now and you don’t want to bother finding all the best prices for each individual component and then fitting them all together, you’ll find a lot of value in pre-built PCs.

So also, the client will never need to stress over PC parts compatibility when purchasing a pre-built PC. And it’s not even conceivable to commit an error in this perspective as these PCs arrive already assembled and appropriately tried.

Unlike when constructing your own gaming PC, you have full tech support from the vendor when you purchase a pre-built PC. In the case of something turning out badly, or if any of the PC Parts gets damaged in shipping, you may just call the manufacturer right away for a replacement.

We all know how important customizability can be for PC gamers. Not only in terms of function but form as well. High-end pre-built PCs are rather easy on the eyes, but chances are they’ll never look exactly the way you’d wanted to your ideal PC. Maybe, the RGB stripes will be in the wrong places, or maybe you’ll be locked into LED lights that just aren’t the right color for you. You probably won’t turn down a deal on a great pre-built PC just because of the wrong LED lights, but you will have to look at that computer every day for the foreseeable future. Now, in all fairness, buyers have more options today when it comes to pre-built PCs than ever before, but these options are mostly concerned with RAM and storage capacities or bumping the CPU or GPU up a notch. The choice of motherboard however is set in stone as is the cooling solution and the power supply.

Building a PC requires time and knowledge. Not every person can plunk down parts scattered on the table, and get to the PC building. Depending on your setup, it may take a few hours, sometimes over a day to get your PC setup done and running. Also, cable management is a tricky task that can lead to more harm than good in inexperienced hands. These tasks come only in premium pre-built PCs. The producer does all the messy work so you don’t need to. Be that as it may, they likewise add assembly expenses to the bill, which can now and then altogether increment the last cost of the PC.

Modifying or Upgrading the Prebuilt PC will Void the Warranty

It’s difficult to perform upgrades on the Prebuilt PC without sacrificing the warranty. Tampering with the hardware of a pre-built PC in any way will typically bring about voiding its warranty. With that said, there is no opportunity to modify, disassemble, or in any case control the parts without potentially forfeiting manufacturer support. Although, it takes years for a PC to require an upgrade, by which point the warranty will be expired, anyway. We can’t still keep away from the shifting activities we do on our PC, which will sometimes require us to upgrade, especially if the activity you do reaches the capacity of your pre-built PC.

As should be obvious, the fight between pre-built and custom-built PCs isn’t so uneven. Everything comes down to you, the purchaser. It relies upon what you need from your PC if all you need is to get the best possible performance for your cash, at that point, making your own PC from scratch is the best approach. On the other hand, on the off chance that you need a PC right away and you would prefer not to stress over it at all for a long time to come, you can’t go wrong with a pre-built one.