How Much RAM Is Recommended for Streaming? 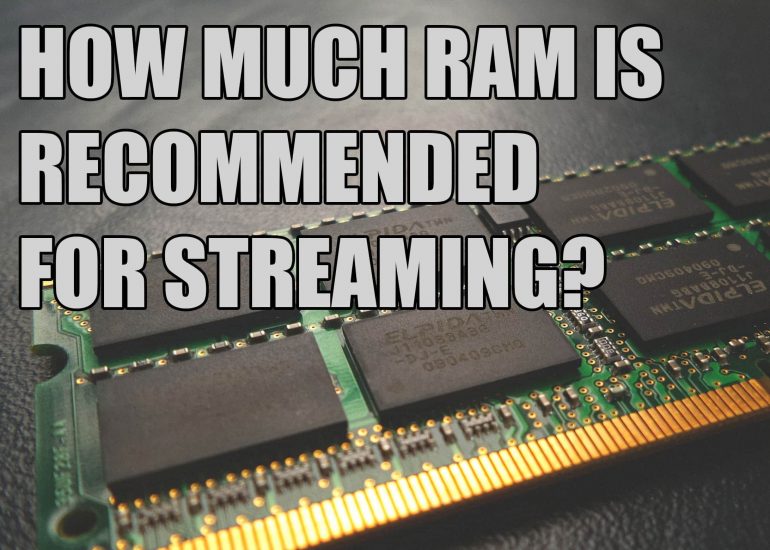 The number of people who are streaming in recent years is constantly increasing. PC building has become more popular nowadays, and it’s because of the amount of gaming as well as streaming that’s out there. Numerous people on forums such as Reddit are asking questions about what’s the ideal PC specs for streaming and how much RAM do they need? In this article, we will be focusing on RAM, and you will find out later on how much RAM do you actually need for streaming.

Streaming platforms like Twitch, YouTube, and Mixer requires you to have multiple processes running at once, which can take up a very large portion of the RAM capacity you have available. If your RAM is unable to keep up with the required processing power, it will result in poor stream quality. So, how much RAM do I need for streaming?

Is 4 GB of RAM enough for streaming?

Generally speaking, 4 GB isn’t enough for live streaming. The truth is that most games today require more than 4 GB of RAM alone. Likewise, considering the OBS streaming software, Discord, and other applications you have running, it turns out to be certain that 4 GB of RAM is decent enough for gaming but not streaming.

Will 8 GB of RAM be enough for streaming?

The short answer is yes, 8 GB of RAM is considered the bare minimum for streaming. However, games are slowly increasing their requirements and new games today are more demanding. Maybe an 8 GB of RAM is good for now, but the days are slowly coming to an end. Also, 8 GB is more than a viable choice, it’s a great way to cut costs.

Is 16 GB of RAM Good Enough for Streaming?

Well, 16 gigabytes is undoubtedly the way to go right now especially if you aren’t on a tight budget. Yes, 16 GB is the recommended and the majority also says that it would be the sweetest spot for streaming. 16 GB RAM will give you enough room for running multiple software at the same time. 16 GB is also good for future proofing your build. Just like what I said earlier, you are now able to run software like OBS, Discord, and other software that are required for streaming.

Other Things To Consider:

Should you buy single or multiple brand modules? Nearly every motherboard supports dual channel memory nowadays, while some even support quad channels. Dual-channel will give you a performance boost, we all know that. But this post is hardly substantial, you probably won’t even notice it in some PC activities. Instead, the main advantage of having multiple Ram modules is that they offer a greater contingency in case of failure, and are much cheaper to repair. For example, you have a 16 GB module and it breaks, your whole computer will be unstable until you replace it with a new one. But if you have 8 GB modules and one break, your computer will operate just fine on the remaining one.

The higher the frequency of your RAM the better. Contingent upon the game you’re streaming, some demanding games require more computational power so I would recommend you to get a much faster RAM. We recommend you to go with the 3200 MHz, it is the sweetest spot RAM speed that you can use for streaming to achieve decent performance.